What an incredible experience to participate in the highest level of competition for women’s lacrosse and to get to share it with talented women from 19 countries worldwide. Teams have been arriving over the past two days to the campus where all the teams are housed, filling the hallways with different accents, country colors, and many familiar faces.

I have been meaning to write since arriving here on Saturday, July 6th. Between three practices a day, team meetings, coaches meetings, eating, and sleeping, I have found very little energy to do anything but plop on the nearest soft surface. And I’m not even playing!

It would be virtually impossible to capture all that has happened since my plane touched down three days ago. I feel like I have been here for at least a week, and I mean that in the absolute best way. As a staff we have been working hard to cram in as much conceptual material as possible without overworking the girls’ brains and bodies. Every girl on the team is like a sponge. They improve with each passing hour and are eager to learn and play. We have had five practices and one scrimmage in the past two days. Despite heat and inevitable soreness, the team is energetic and positive. I have come to expect nothing less from Ireland lacrosse.

In the hope of getting into a rhythm of writing about the World Cup, here is a recap of the past 48-hours.

A majority of the Ireland team arrived on Saturday at Toronto airport. Long flights, jetlag, and flight delays did not dampen anyone’s spirit. As I walked through the terminal looking for the team, I was dragging with fatigue. I got married in June and it has been a wonderful whirlwind of events leading up to my arrival in Canada. However, it has been non-stop for over a month and all I wanted was a nap.

All of my fatigue vanished as soon as I saw the Ireland girls. Their enthusiasm and excitement was contagious. I found myself immersed in conversations and laughing to the point of tears within minutes of my arrival. It felt like coming home.

In the midst of all the excitement of being reunited with women whom I had missed more than I realized, I had a pang of sadness. I realized that I would not be playing along with them, but standing on the sidelines coaching them. I worried that things would change, and I would struggle with my new role.

The fear disappeared as quickly as it arrived as I looked into the faces of the Ireland girls. They supported and encouraged me. Yes, things would change. They already had. But change is good. We have many new, talented, and wonderful players. We have a completely new coaching staff. We are ready for anything…and excited to begin.

Meg, our Head Coach, and Jackie, the other assistant, were some of the last to arrive. Not having met Meg before, I did not know what to expect. We have talked and emailed a great deal, but that is not the same as meeting someone. I knew Jackie and I were going to be thick as thieves based on our trip to Ireland in the Fall. As soon as I saw Meg, I relaxed. She greeted me with her easy smile and made me feel instantly comfortable. I knew that it was going to be a great partnership in the coaching staff, and it has proven to be even better than I expected.

After the last person exited the customs’ doors, greeted by cheering and waving teammates, we loaded up a school bus–a first for most English and Irish girls–and headed to our home for the next two weeks: Oshawa. 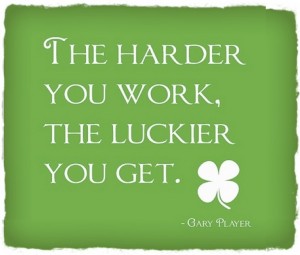 Meg started practice off with this quote at 8 am Sunday morning: “The harder you work, the luckier you get.” The girls seemed to absorb the words and their play reflected it. Girls were battling for balls, hustling to the end of every drill, and pushing themselves to be better with every play. By the end of the first practice I was so excited for the next session. This was a new team and a new year. Our year. As coaches we couldn’t wait to keep working with the girls and molding the team into what we wanted it to become.

The following four practices and the scrimmage against Scotland showed that we are heading in the right direction. We are feistier, faster, and fitter than we were at Euros. From last year to this year I have seen significant improvements and changes in the team. Many things are different now, but one aspect remains the same. PRIDE. Ireland pride runs deep to the core of every player, coach, manager, and director involved with Ireland lacrosse. It is unlike anything I’ve ever experienced, and I’m so grateful to have the opportunity to represent Ireland.

We have been lucky to get great Ireland gear from Brine, Force5, Opro, and other companies. It feels like Christmas to receive all the goodies from Larry, our wonderful equipment manager. The custom Brine stick is already a hit with other teams, and I really appreciate my friend Kathleen Miller coming through for us with the sticks, goggles, and goalie gear. Every team needs a little swag.

Tomorrow the real fun begins. We have an exhibition match against Sweden in the morning, followed by a day packed with team pictures, facility tours, practices, and meetings. While it is a busy day, it also launches us into the reason we are all here…to compete in the World Cup. I can hear that team buzzing with excitement to suit up into their team uniforms for the first time and step on the field representing Ireland.

We ended tonight’s meeting with my favorite song, “Ireland’s Call”. Jackie and I both gets chills, or “goose pimples” as some girls would say, each and every time we hear the song. Talk about pride.

In two days the real games begin. We will continue to savor every moment of the next two weeks because this is a once in a lifetime event. In four years there will be new players and some returners. But all we can focus on is right now and making it everything we hoped it could be. I am confident it will be all that and even more.