Often you can learn as much from a loss as you can from a win. There are always lessons to be learned from sports that pertain to the game and to life. How hard can you push yourself, how do you respond to adversity or making a mistake, how deep can you dig, and what are you willing to sacrifice? Sports challenge us to face our inner critics and to push our mental and physical limits to be successful. And whether you win or lose, there is always something to be gained.

Of course, everyone prefers to learn from winning rather than losing.

Our two games in the past two days have taught us a lot about our strengths, areas for improvement, and how to grow as individuals and as a team. The first game we lost, but in many ways it felt like a win. The second game we won, but it definitely felt like a loss. It came down to execution and playing as a team for 60-minutes.

Our first game against New Zealand was physical and intense. New Zealand is a talented team with good size and speed. We seemed to get a bit rattled at the idea of playing New Zealand and came out tight, making rushed decisions to get rid 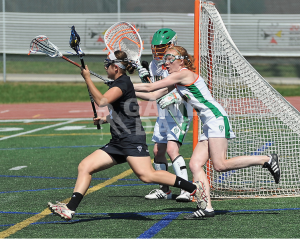 of the ball. In terms of skill, the game felt much closer than the final score of 13-4. We played with them, causing them to have more turnovers than we did. However, our shots weren’t finding the back of net, which is the way it goes some days. The team hustled and worked until the final whistle. The girls left it all on the field. Even though the score didn’t end up the way we wanted, it was clear to see that with a few adjustments, both mental and tactical, we could take a great deal away from the match.

The Finland game was a slightly different story. We came out strong, taking the lead by eight goals early in the first half. Then we got comfortable. We still hustled and worked hard, but we did not play 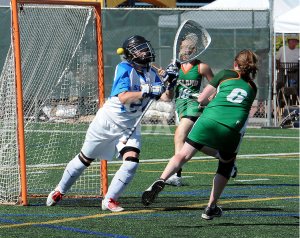 Ireland lacrosse. As Finland started a solid comeback, we became a bit frantic on the field, making small errors that resulted in big plays for Finland. The team was visibly frustrated, as was the coaching staff. We ended the game 13-9, and everyone appeared a bit dejected. As the team walked silently into the locker room, Meg, Jackie and I reflected on what can be gained from this type of game. How can we use this experience where we focused outwardly instead of inwardly to draw a new level out of the team? What is our learning moment from this win that feels like a loss?

Meg is a great motivator and student of the game. She sees it through different lenses and knows what buttons to push when needed. She is a true competitor and looks to draw that out in each player. We had an excellent team meeting tonight where we discussed facing challenges. Every person on the team shared her perspective, allowing the team to get on the same page and to understand what motivates each other. The mood over the loss to New Zealand and the win over Finland provided the perfect climate to discuss essential lessons that will help us be more successful as a team in the future. I walked away from the meeting excited for us to play tomorrow. I think the team realized that it doesn’t matter who we play as long as we bring our passion, fire, confidence, work ethic, trust in each other, and PRIDE to the field. If we do that, we will be successful no matter the final score.

We are 3-1 in our bracket, which puts us in second place behind New Zealand. Although the win over Finland felt bittersweet, Bernie, Caroline’s grandad, made the point that “an ugly win is better than a beautiful loss”. True enough. Our game tomorrow against Germany is a crossover game and will not affect our place in our bracket. That will not stop us from coming out strong from the first whistle and playing OUR game until the final whistle. I know that we can do it, and I’m excited to see us in action tomorrow morning.

We had a great trip to Niagara Falls today, as well as Irish night at Trinity Pub last night for our incredible 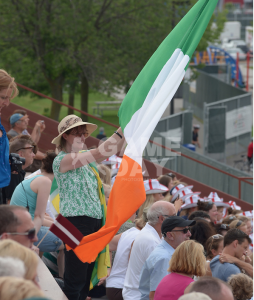 supporters. We have the best fans any team could imagine. Thank you to our many supporters, friends, and family who are cheering us on in Canada and from afar! I will write more about our fun excursions tomorrow.

For now, I’m off to visualize coaching our team to a victory tomorrow.

COME ON YOU GIRLS IN GREEN!