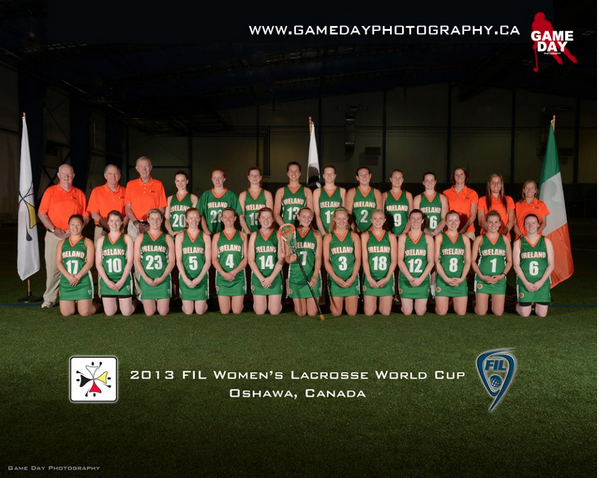 Yesterday was another great step for Ireland lacrosse. We have been eating, training, and sleeping at the Residence Inn at Durham College in Oshawa. Getting to the World Cup facilities and seeing life-size posters of players from different teams all over made this whole process feel real. All the practice and meetings were leading up to the biggest event in women’s lacrosse worldwide: the World Cup.

The lobby at the facility was bustling with girls donned head to toe in their team’s gear, clearly marking what country they represent. There was a buzz in the air as certain renowned players walked by, with conversations breaking out about whose who and what teams are the strongest. Teams seem to size each other up in passing, sometimes sharing waves or smiles while other times staring stonily forward.

We took our team picture and then headed to the pitch to prepare for Sweden. The girls passed around on one of the fields where we will be playing throughout the tournament. The feel of turf after a week of playing on thick grass fields was a great improvement.

Our opening game against Sweden was charged with high energy and anticipation. Although it was an exhibition game, the team came prepared to play their hardest. The Sweden game from the 2012 European Championships still had a residual sting. We lost in double overtime by one goal. That game was particularly frustrating because we had two of our best players, Caroline and Katelin, sidelined by yellow cards from previous games and then I went down with my knee injury. It felt like the win slipped through our fingers last year, and we wanted to avoid that happening again.

As the team took the pitch for the draw, I realized how excited I was to be able to coach this team. From the first draw it was evident that we had massively improved from 2012 Euros and from our first practice just a few days before. We won the first draw and went down to score a quick goal. Solid start. The team battled for every ground ball and came up with the ball or at least a call almost every time. We used to just go immediately for the check and be sent four meters behind. We made the change and the results were instant. If the girls continue to make the little adjustments that we emphasize, it will be a great week of games.

The play was a bit frantic in the beginning with most people passing to the first cutter, which often was guarded much more closely than the second. However, we got it sorted throughout the game. The hustle and heart was apparent all over the field. Girls were trusting each other with long passes instead of just running the ball themselves. Goals were scored off of unselfish cuts and passes. Mistakes were made and breakdowns in communication happened as well. That is normal for any sport. The importance is what happens after the mistake. Get frustrated and point fingers or move on and work harder. We worked harder.

We finished the game with a 9-1 win and a clearer picture of what is working and what needs work. Meg an incredible understanding of the game and how to get the best from each girl. I guess that is what happens after winning four National Championships at Maryland and coming off two consecutive National Championship wins at CW Post. It is great to learn from her and from Jackie. We each bring a slightly different coaching style or take on things, which seems to complement each other.

Celebrating the win over Sweden in style

When we returned the dorms, the team prepared for the epic battle for best version of Ireland’s National Anthem sung in Gaelic. Last year we had two stellar performances, though I’m happy to report my team won.

Instead of doing two renditions the two teams surprised everyone by blending together to make an Ireland flag, very creative if you ask me. They said that we were one team and united together. Maybe a good excuse to get out of singing in a small group, but I love their rationale.

After the cheers died down for their performance, Meg announced our 2013 World Cup captains: Katelin Billups, Rebecca Headon, Robyn Morris, and Devin O’Leary. Devin is an addition from the 2012 captain squad and brings a great deal of leadership, knowledge, and personality to the group. We were thrilled with who the team selected and know that the captains will do a tremendous job leading the team throughout this journey. The loud and the proud Rebecca Headon will have the honor of carrying the Irish flag. She, Orla, and Robyn were all part of the 2009 World Cup games (Orla carried the flag in 2009), and it is great for the program that they are all still here and major parts of this team.

We are getting ready to head out to the Opening Ceremonies. It will be the first time seeing all of the 19 teams in one place. I’m sure that I will have many rounds of goosebumps. To watch the opening ceremonies live and for free, click here! The ceremonies begin at 4:30 pm EST. It is a great chance to see what the World Cup is all about, so I hope you can watch and cheer when you see these girls in green!

Tomorrow we have our first match against Latvia at 10 am. One more sleep. We are ready. And all tatted up in pride. 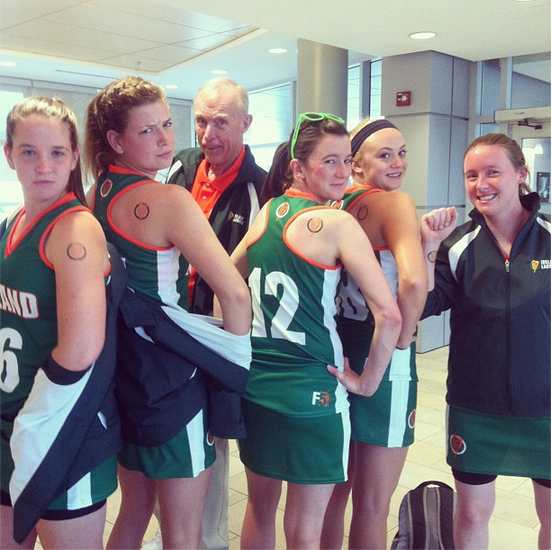