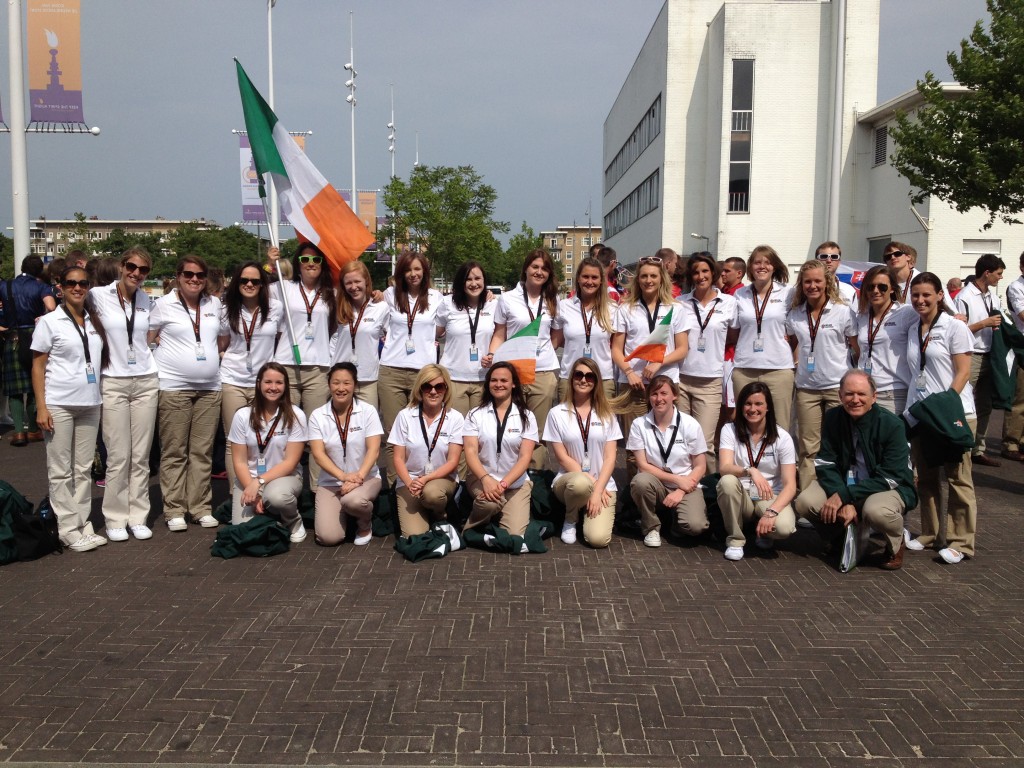 I have been a busy bee.

We woke up yesterday a bit sore and energized to run the mile. I got a personal best of 6:05, and the entire team cruised in with good times. After two hours of practice following the mile, I couldn’t believe that I was disappointed we were done for the day. I enjoy playing with this team so much and being coached by our coaches that I would have been happy to stay on the pitch for hours more. Pretty unusual for me.

We traded our training shorts for khakis, revealing that there were actually attractive people behind the goggles. We loaded the bus with the men’s team and headed for the opening ceremony for the tournament. Over 2,000 players lined up, chanting their country’s song, and sporting brand new gear splashed in their colors. We waited outside the arena to be called, bantering with the men’s team and snapping photos in line. 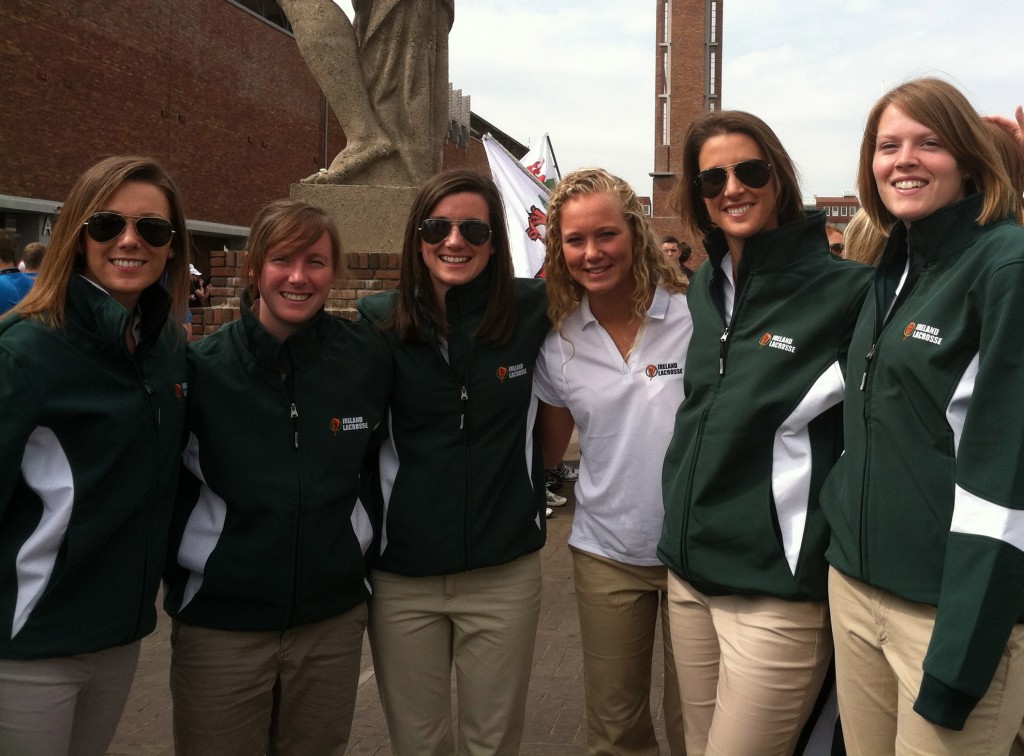 The ceremony was held in the arena where the 1928 Olympics were held and will be again in 2028. The Olympic rings covered the entrance, making us feel like we had entered into a new threshold. Many hope and expect that lacrosse will be an Olympic sport by 2028, if not way before. Fingers crossed.

Today was another great day. We did team stickwork this morning and I led everyone in a modified version of yoga sun salutations. I’m not giving up the stick for the mat anytime soon. My yoga skills could use some work.

We headed to the pitch for lunch and practice, giving us a chance to scout some of the other teams. I am impressed by the overall level of competition and athleticism on each team. I’m a tall girl, but there are some talllll girls on other squads. Massive.

I am officially playing midfield, which is exciting and bit intimidating since I have not played it before. However, I love playing on both ends of the field, so I’m sure it will work out. And work ME out.

After practice we watched the men’s game versus England. I have been on many teams in my life, but the support and unity that the men’s and women’s teams have is unparalleled. I felt so overwhelmed to be part of this amazing group of players, signing at the top of my lungs supporting Ireland and the men. 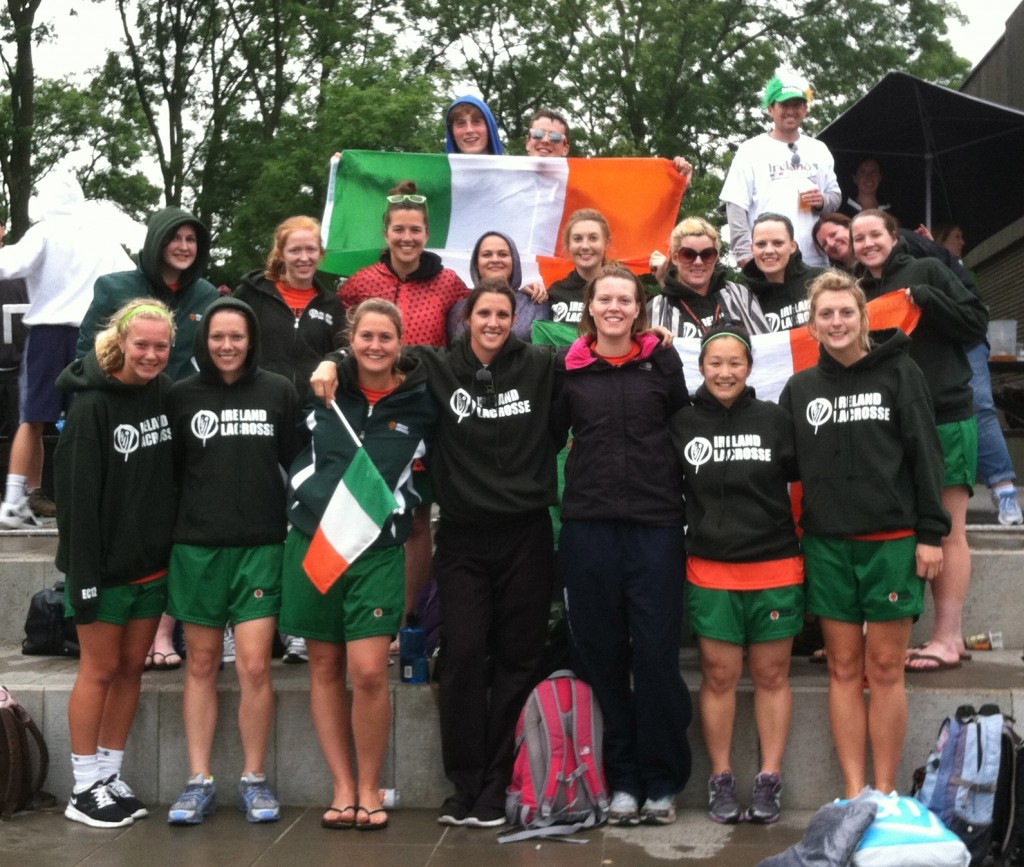 My mom arrived today and my dad arrives on Saturday for our first match against England, our toughest competition. I imagine that it will be powerful to put on the green and orange uniform knowing that I’m representing my dad’s entire side of the family, especially my grandparents who have both passed away. I’m sure it will be quite a moment for my dad as well.

Well, I’m off to bed. Tomorrow we have an early practice and then will head into the city for the first time since we arrived. It has already been a whirlwind, and I already consider my teammates dear friends. I can only imagine how much closer we will be after this. There is a special bond we share and an energy that each girl possesses. Our coaches all played for Ireland in the 2009 World Cup, and they share the same passion and enthusiasm that we do. It is a great group and I am blessed to be part of it. GO IRELAND!